Boiled Leafy Greens or Horta Vrasta in Greek are a staple in Greek cuisine and a popular side dish. This simple to make recipe is served dressed with good olive oil and lemon juice for a healthy, nutritious dish.

Growing up in a Greek home, horta was something that was frequently on our table. This dish, comprised of leafy greens (often wild) that are boiled and then topped with olive oil and lemon juice, was a side dish to so many of our meals.

As a kid, I can’t say I was a huge fan. But as an adult, I have come to appreciate this healthy side dish. It’s a simple, healthy and nutritious dish.

While horta can be eaten as a vegetarian dish – they are so good topped with feta and served with a side of crusty bread!), they are usually served as a side dish. Horta vrasta are a great accompaniment for so many different meals but we especially love to serve them with fish dishes and BBQ dishes in the summertime.

So what leafy greens do you use to make horta vrasta? There are so many options to choose from. These include:

All of these options can be used to make horta and offer a variety of nutrients. While some of these have bitter flavours, others are mild. If you are not a fan of bitter greens, opt for amaranth leaves (vlita) or swiss chard which are much more mild in flavour.

Where to get horta

Ask any Greek kid and they will tell you about their parents excursions out of the city to find horta in the wild. My parents still do this to this day. Every spring, when horta are tender and at their best, they head out of the city to rural areas with garbage bags in hand. After returning from these excursions with bags of fresh wild greens, they would proceed to clean them and prepare them for freezing so we could enjoy them in the months ahead.

Luckily, you can also find horta in local supermarkets. In Greece, you can find a wide variety of leafy greens at the supermarket to use for horta vrasta. In other parts of the world, although it may be hard to find some, you can still find many of the leafy greens on my list above at your supermarket.

That’s great news for me, cause I have no desire to head out for any horta-picking excursions!

In our home, we grow a variety of leafy greens in our garden each summer (as do our parents) so we can have horta at the ready all summer long. We especially love growing curly endive and vlita (my personal favourite) for this. The curly endive I used in the pictures for this post was from my mother in laws garden.

How to clean horta

Before cooking horta, you will want to make sure that they are thoroughly cleaned. This is especially important if you are using wild horta as they may be covered in more dirt than the ones picked up at the supermarket.

To clean them, I submerge them in a large bowl of water. You can also fill a clean sink with water to do this if you are working with large quanities.

While they are submerged in water, swish the greens around in the water to loosen up any dirt. Drain the water and repeat this until the water is clear and the horta are clean.

While cleaning the horta, I also trim any thick stems from the horta and remove any leaves that don’t look too good.

Note: for ingredient amounts and full instructions, see the printable recipe card at the end of this post.

How to make Horta Vrasta

Other popular ways to use horta

While horta vrasta are a popular Greek side dish served throughout Greece, horta can also be used in other ways. They can be used in fricassee dishes and in Hortopita (Greek Mixed Greens Pita). This Greek filo pie is similar to the popular Spanakopita except that in addition to using spinach in the filling, other leafy greens are added as well.

What to serve with Horta Vrasta

Horta vrasta go great with a variety of meals, but we especially love them fish dishes and other traditional Greek meals. Some ideas to serve alongside horta vrasta include:

I hope you enjoy this recipe as much as I do! Kali orexi (Bon appetit in Greek)! 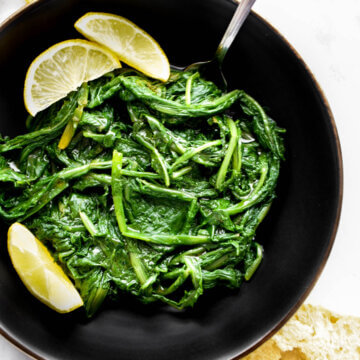 Hi, I’m Cathy and welcome to Herbs & Flour! If you’re a home cook that loves to cook wholesome meals from scratch (as well as indulge your cravings from time to time), you have come to the right place! I hope you enjoy the recipes on Herbs & Flour and that you get as much joy out of making the dishes as I do! Read more>> 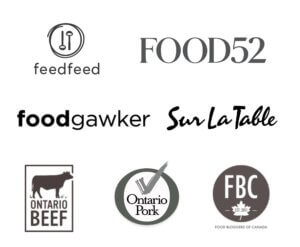 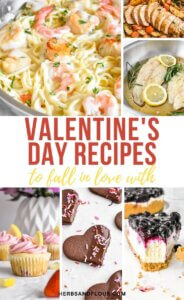